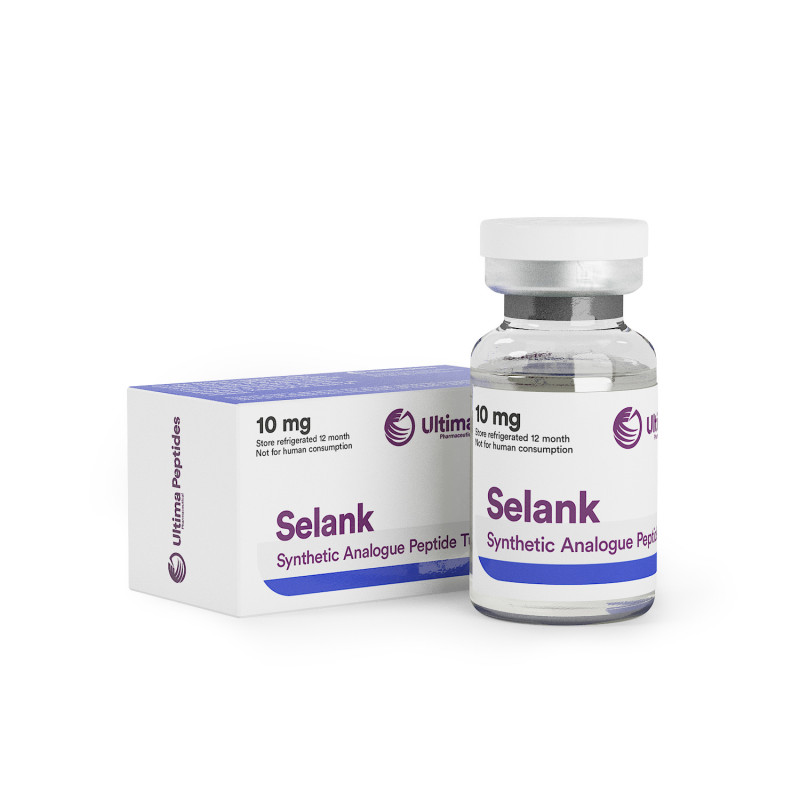 Products are shipping without brand label for security reasons.

The recent boom in biotechnology has opened the door for studying new biologically-active compounds, including “cognitive enhancers” or “nootropics.”

One such compound is Selank — previously known as “TP-7” — which belongs to a class of molecules called synthetic peptides, or small artificially-designed proteins.

Selank has been touted as an “anti-anxiety” compound, and has also been claimed to improve learning and increase energy — supposedly without side-effects or the risk of addiction.

Selank was derived by combining the sequence of a peptide called tuftsin with another sequence that improves its molecular stability. Tuftsin is naturally-occurring, and makes up one part of the natural antibody IgG.

Both tuftsin and Selank have been reported to reduce anxiety and increased serotonin levels in rats, with Selank being slightly more effective.

Selank has been approved in Russia for the treatment of generalized anxiety disorder (GAD) and for its use as a nootropic. However, the FDA has not approved its use for any conditions. Nonetheless, Selank continues to be available in several countries, where it is often sold as a “nutritional supplement.”

Although the mechanisms behind Selank are not yet fully known for certain, Selank is believed to act in part by stabilizing enkephalins in the blood. Enkephalins are natural peptides in the body that are believed to counteract the stress response.

However, one animal study in mice did not demonstrate the stabilization of enkephalins following dosing with Selank, and the treated mice also did not appear to benefit from any significant “anti-anxiety” effects.

According to some cell studies, Selank may bind to GABA receptors. By extensions, most compounds that bind to GABA receptors generally cause “sedative” effects. In one study of mice treated with Selank, researchers reported increased activity in inhibitory neurons, which rely on GABA. This resulted in less overall brain activity, which is generally consistent with a sedative effect.

In addition, some researchers have reported an increase in BDNF, an important brain-growth compound (neurotropic factor) which has been implicated in learning and memory. Some researchers have suggested that this mechanism may be responsible for some of Selank’s claimed cognitive effects.

According to one preliminary clinical trial on 62 people, those given Selank reported fewer anxiety symptoms, with a greater decrease being observed in those suffering from pre-existing anxiety disorders.

In another trial, similar benefits were reported in 60 patients suffering from anxiety and phobias, with these effects lasting up to a week after the final dose.

Additionally, in one study of 70 anxiety patients, Selank was reported to increase the effects of phenazepam (an anti-anxiety drug banned in some U.S. states for its recreational use), while also reportedly reducing its rates of negative side-effects (such as drowsiness and memory loss).

In one animal study, Selank was reported to reduce anxiety in mice. The more anxious the mice were to begin with, the more significant the observed changes in their behavior after treatment.

Additionally, Selank was reported to show “anti-anxiety” effects in one study of rats who received 4 weeks of daily treatment.

Although limited, some of the above evidence suggests that Selank may potentially help curb anxiety, although much more research will still be needed to confirm its effectiveness and safety in human users. If you suffer from anxiety, you could have a discussion with your doctor about whether taking Selank might help you — however, always remember that you should never take this supplement in place of what your doctor recommends or prescribes.

Selank was reported to stabilize memory traces (i.e. potentially improve memory storage) in rats during one 30-day trial. However, it is unclear how these measurements were performed, as memory traces are not detectable as discrete locations in the brain.

One other animal study has reported that Selank may also preserve memory in monkeys.

However, appropriate human studies are lacking, and remains unknown what effects — if any — Selank might have in healthy human users. It is also unclear whether or not this compound would be safe for such users to take (either in the short- or long-term), and so caution would be advised until much more additional research is performed.

In one study, researchers gave Selank supplements to rats with toxin-induced brain damage. This drug reportedly restored their brain activity to normal levels.

Selank has been reported to decrease depression symptoms (immobility during a forced swimming test) in mice. Curiously, it was reported to be more effective at relatively lower rather than higher doses.

Antioxidant Activity in the Liver

In one preliminary animal study, injection of Selank was reported to increase the levels of antioxidants in the livers of stressed mice.

In one animal study of sedated cats, Selank was reported to decrease blood pressure by about 30% for up to 3 minutes.

While these preliminary findings are interesting in that they suggest that Selank may have some short-term cardiovascular effects on blood flow, the relatively short durations of these effects is hard to interpret, and may suggest that these effects are not strong or medically significant.

Additionally, these were only observed in animals, and so whether these effects would be similar in healthy human users remains unclear.

Anxiety is one of the more common symptoms involved in alcohol withdrawal. To mimic high alcohol intake, rats were given a 10% solution of ethanol (alcohol) as their sole drinking source for 24 weeks. Selank reportedly decreased the anxiety of these rats after a 48-hour alcohol withdrawal period.

According to one animal study, rats who were fed a high-fat diet reportedly showed 35% less weight gain when treated with Selank. Additionally, total cholesterol levels for these rats were reportedly reduced by over 58%, and blood glucose levels were reduced by 23.5%.

In one animal study, mice with breast cancer were treated with daily doses of Selank and had slower tumor growth. Also, these mice reportedly lived longer than their untreated counterparts.

However, this preliminary finding doesn’t mean that Selank has any value in anticancer therapy. Much more research would be needed to verify and extend these early findings into legitimate medical treatments for cancer. Do not under any circumstances attempt to replace conventional cancer therapies with Selank (or any other supplements)!

Inflammation in the Spleen

After treatment with Selank, the spleens of mice were reported to show increased levels of several inflammatory response genes, which may suggest some degree of protection against the harmful effects of inflammation.

Selank has been reported to reduce the size (area) of stomach ulcers in animal models.

Some researchers have speculated that this may be because this drug increases the flow of lymph — an important component of the immune system — to the stomach.

Nonetheless, much more research in humans would be needed to confirm this effect, as well as its potential mechanisms.

Selank reportedly increased IL-6 in blood cells collected from patients suffering from depression. IL-6 is an inflammatory protein that is believed to help fight off infections.

Additionally, according to one cell-based study, Selank was reported to stimulate the release of interferons, which are anti-viral molecules.

Selank has also been proposed to potentially protect cells against some viral infections. However, one animal study in mice infected with a virus did not report any anti-viral benefits from Selank treatment, which casts doubt on this potential use.